来源：英语学习交流
发布时间：2009-05-14 13:00:00
查看次数：
内容提要：China today begins arguably the first test case of whether the country's state-owned and state-censored media can win the trust of a foreign readership as Global Times, one of the country's best-selling newspapers, launches an English-language version. 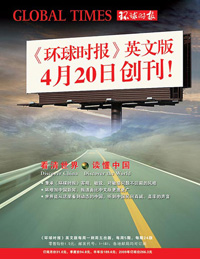 China today begins arguably the first test case of whether the country's state-owned and state-censored media can win the trust of a foreign readership as Global Times, one of the country's best-selling newspapers, launches an English-language version.

Global Times claims that its English edition, to be published today for the first time, will offer a whole new experience compared with China Daily, the country's only other national English-language paper.

“China Daily speaks for the government. We will be the voice of the people,” said Hu Xijin, Global Times editor-in-chief, in an interview with the Financial Times.

That is a stretch, for Global Times is an affiliate of the People's Daily, the Communist party's mouthpiece.

Mr Hu insists that will not matter, however, and points to the editorial profile and commercial success of his Chinese-language paper. “For the English edition, making it commercially viable is also the first priority.”

The Chinese edition of Global Times sells more than 1m copies a day by focusing on international news and keeping its coverage of the daily appearances of state and party leaders to a minimum.

The English version of Global Times will focus on China rather than international news. “But our style and our stance will not change,” says Mr Hu.

Part of his formula for success has been to appeal to China's new nationalism, giving big play to advocates of military expansion and to hardline criticism of the west.

One of the new paper's dummies features a front page story with a call for China not to listen to the US in the handling of the North Korea crisis.

“Indeed we found the perceived nationalism to be a problem during our test run,” said Mr Hu. “Maybe we have to adjust the way we express ourselves.”

The bigger challenge, however, will be to convince foreign readers of China's side of the story.

Despite his insistence that this is a commercial project, Mr Hu hopes to receive some of the government funds for the international propaganda plan. “We deserve those because we also serve the public by helping China communicate with the world.”

The paper will start with a 100,000 circulation printed in five cities in China. Once the new venture is on track, distribution in the US is planned.