Oregon Family Thanks Teen for Rescuing Boy From House Fire

Oregon Family Thanks Teen for Rescuing Boy From House Fire 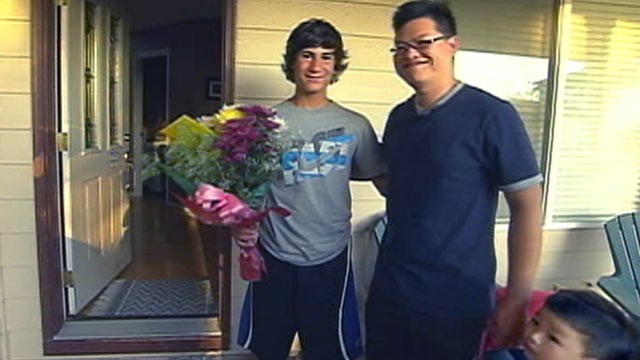 Child Rescued From Fire by High School Freshman
Auto Start: On | Off
By JENNIFER ABBEY and ANTHONY CASTELLANO
An Oregon teenager is being hailed as a hero after he saved a young boy from a house fire by climbing up a ladder into the burning home to bring the child to safety.

High school freshman Marcos Ugarte, 14, didn't think twice about running down the street Monday night in Troutdale, Ore., with his father, Eduardo, to free 8-year-old Cody Ma from the flames that broke out on the second story of the home.

Cody's father, Alex, his mother, Suzanne, grandmother Yim and brother Nathan made it out safely with the fire still raging inside the house.

The Ugartes had never met the Ma family before the fire. They shared a smile and a hello on the street, but never had a conversation. All that has changed now that they are forever linked. The Ma family expressed their gratitude to Marcos Tuesday, thanking him for his bravery by giving him a card and flowers.

"Just glad I got him out, too, and you guys are all safe and weren't hurt," Ugarte told the Ma family.

Alex Ma said of the Ugartes, "I may never forget their names because they're my heroes. They're my son's heroes forever."

Marcos told ABC News affiliate KATU-TV he got a lot of congratulations from fellow students at Gresham High School. The Gresham Fire Department plans to honor Ugarte later this year.

The fire broke out just after 10 p.m. Monday when Ma's wife made a frantic call to 911, telling the operator that her son was still stuck inside the home.

"OK, can you get your son out?" asked the operator.

"Yeah, we tried to but he locked the door," Suzanne Ma said. "He won't open it."

Marcos and his dad were sitting on the couch in their home four doors away when they heard screaming down the street.

"As soon as we realized it [the screaming] was coming from the house down the street, I assumed they were just arguing," Eduardo Ugarte said. "I said to Marcos, 'Let's just leave them alone.' But Marcos said, 'No Dad, look at the glow behind the house.'"

Ugarte and Marcos took off running for their neighbors' house. Alex Ma tried numerous times to get upstairs to rescue Cody, but was unable to reach him through the thick smoke.

"When I arrived at the door of our neighbor's house, he [Ma] was stumbling down the stairs because he had been completely engulfed in flames," Ugarte said. "He had soot coming out of his nose and his mouth, he had just ingested so much of it."

Ugarte ran into the house and crawled to the room where Cody was trapped. He crawled across the floor but the 8-year-old had locked himself in his room. The smoke was so thick, Ugarte couldn't stand.

"The boy has ADD [attention deficit disorder] and he decided to run into another bedroom on the second floor and locked the door so whether he was scared or just trying to hide from the fire we're not sure," Gresham Fire Battalion Chief Mark Maunder said.

When Ugarte, a 47-year-old teacher, came back empty-handed, Cody's grandmother was trying to pull a ladder from the backyard. Marcos grabbed the ladder and climbed to the second floor to the boy's room. He broke through the window and rescued the boy trapped inside.

"I took the ladder, and I propped it up on the window, and I crawled up the window and punched the screen out and grabbed the 7-year-old boy -- about 7, he looked 7 -- and grabbed him and carried him down the ladder," Marcos told KATU-TV shortly after the rescue.